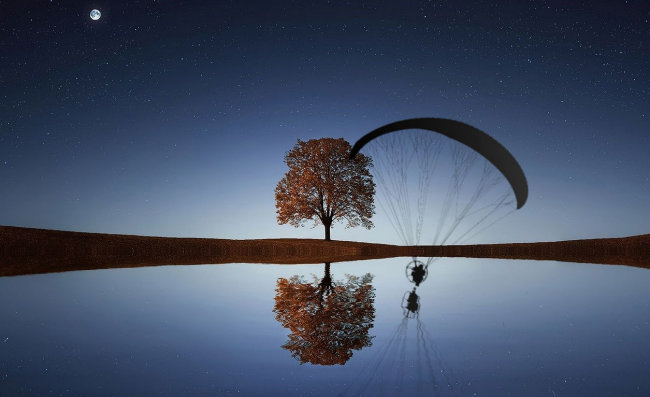 Can paramotors fly at night?

We all love the thought of a little night flying, and I’ve been told by a few pilots that it’s really fun!

But is it legal to screw a strobe light to your paramotor's frame, and takeoff on a bright moonlit night?

CAN PARAMOTORS FLY AT NIGHT

You cannot legally fly a paramotor at night. Many pilots fit strobe lights to their paramotors to improve their visibility to other aircraft after sunset, but you can’t fly at night.

WHAT IS THE LATEST TIME YOU CAN FLY

This obviously varies because sunset happens at different times in different countries, and these times vary considerably throughout the year.

For example, if you live in certain parts of Iceland during the summer months, you’ll be able to fly at midnight because the sun doesn't set. But during winter you may only have a 4 hour flying window because of the long nights.

As most of our readers are based in the US, it's worth noting that all US pilots will need to fit a strobe to fly during these 30 minute twilight windows.

FAR 103 states:
The aircraft must be equipped with an operating anti-collision light visible for at least 3 statute miles; and all operations must be conducted in uncontrolled airspace. (link to FAR 103)

WHEN CAN WE FLY A PARAMOTOR AT NIGHT

I mentioned at the start that I’ve been told how fun it can be to fly a paramotor at night. I know pilots that have flown in the dark, more than 30 minutes past sunset, but this was done by requesting special permission from the CAA.

You should never attempt to fly past the cutoff without obtaining permission, as you could put yourself and other aircraft at risk. Remember, we’re operating under Visual flight rules (VFR), and this states:

The pilot must be able to operate the aircraft with visual reference to the ground, and by visually avoiding obstructions and other aircraft.

In order to fly in the dark, an aircraft will be operating under instrument flight rules (IFR). You’ll need instruments, something not yet possible for a paramotor, and you’ll need to be in contact with air traffic control.

What if you get caught out?

So what if you miscalculated your return flight and you don’t make it back to your landing field in time?

It’s happened to many paramotor pilots, including myself. You turn around for your return leg only to discover the wind speed has increased, and your ground speed is almost zero.

You’re flying along after sunset watching street lights illuminate below you, car headlights being switched on, and daylight slowly fading.

Your only option in this situation is to find a good field while there’s still enough light, and land the paramotor.

Don’t risk flying after the cutoff, you’re not only risking a midair collision, but coming down into a dark unlit field could end up with a really hard landing, or even a collision with an object on the ground.

MY EXPERIENCE WITH FLYING IN THE DARK

As a pilot who has flown a paramotor at night, and one who has had to find a safe landing spot because it got too dark to fly, I’ve put together a few tips of my own to help you out below.

1. Remember the sun will set sooner on the ground

The sun will always set sooner on the ground, so as sunset approaches reduce your altitude to lessen this affect.

You’ll be surprised at just how quick the light will fade after sunset, which can be very disorienting.

If you see the light fading, you’ll want to be as close to the ground as possible. You don’t want to be 7000 ft up and a long descent from where you need to land, as it’ll only get darker by the time you get back down.

Another thing to bare in mind is that the time it takes to go from sunset to darkness happens much quicker in the winter months. So at the end of your 30 minute window, it will be much darker during the winter.

The darker it gets, the worse your depth perception gets. This can make landing really difficult for some pilots, especially those new to the sport.

This will help to train your brain, and create muscle memory that will ensure you flare at the correct time, just like you did on those initial flights during training.

Although they’re not required by law in many countries, it’s a good idea to fit a strobe if you plan on flying before or after sunset.

Paramotors are notoriously difficult for pilots of faster travelling aircraft to spot, so anything that increases your visibility is advisable, especially for twilight flying.

Find out all about strobe lights, and which ones to buy in this post.

A few years back, a UK pilot flew directly into some high voltage power lines, he was very lucky to walk away from the accident.

In his statement he blamed low light as one of the causes of his accident, but as you'll see in the video linked below, it wasn't even that dark. This just goes to show how important it is to only fly low during well lit conditions.

Video of this accident here

Objects on the ground become very difficult to see as the light fades, so bare this in mind at all times, and do all of your low flying in areas you know well.

And unless you’re landing, avoid flying lower than 100 ft after the sun has set.

5. Remove the sunglasses to land

This may sound a bit obvious, but sunglasses only make it more difficult to see during low light.

If you’re like me you’ll do most of your flying while wearing sunglasses, so remember to remove them before landing onto poorly lit ground.

Although it’s tempting to fly in the dark, remember that it is illegal and you could end up with a prison sentence if you ignore the rules.

I’m aware that people have done it on paramotors and in other types of light aircraft, but these people are risking their lives and the lives of others.

Stick to the rules and we will continue to enjoy the freedom that we’ve been granted. Break the rules, and our sport may end up being tightly regulated.

This means we’d have to obtain a license, registration numbers, and carry transponders, which is something no paramotor pilot wants.