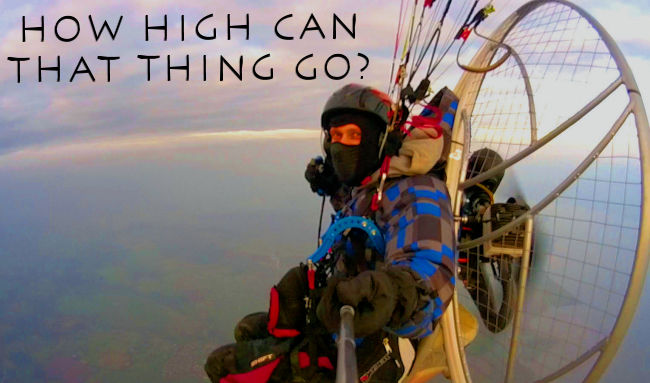 All paramotor pilots will tell you that the best flying is done down low, and that the low speed and climb rate of a paramotor makes high altitude flying pretty tedious.

But at some point we all get the urge to see just how high we can climb before the paramotor runs out of steam. It takes a long time to get there, but if you have the patience, and a good engine, you can climb just as high as a regular ultralight.

So just how high can paramotors fly? And what limits the altitude they can achieve? Let's find out...

HOW HIGH CAN PARAMOTORS FLY?

The average paramotor pilot will never fly over 10,000 feet, but it is possible to fly much higher. The altitude world record for a paramotor is 25,590 feet, which was claimed in 2009 by Ramon Morillas Salmeron.

TV presenter Bear Grylls actually flew higher than Ramon, reaching an altitude of 29,494 feet, but the FAI wouldn't award him the record due to lack of satisfactory evidence.

The record for tandem paramotor flight is 16,620 feet, which was ratified by FAI and added to the records. There's a great documentary of the record breaking flight that you can watch below.

All of these records were broken after the pilots launched from an already high altitude, meaning they could avoid the long climb, and some of the other issues that the everyday paramotor pilot would face.

The UK paramotor altitude record was set by Giles Fowler in 2015. Giles was able to launch from a flat field in Chatteris which has an elevation of just 30 feet. To reach his record breaking altitude of 21,746 feet, he climbed for a lengthy 1 hour and 20 minutes!

What limits the height paramotors can fly at?

Altitude records take a lot of planning, and pilots have to gain permission to fly to these great heights. The average pilot will be governed airspace rules that vary from country to country.

In the US, the highest a paramotor can legally fly without obtaining special permission from the FAA is 18,000 feet. At 18,000 feet class E airspace ends, and class A airspace begins. To fly in class A airspace, aircraft need special equipment for instrument flight, so this is not an option for paramotorists.

Paramotor flight is limited by the small amount of fuel the tank will hold, and a long full throttle climb to altitude will burn it up very quickly. This is why most pilots attempting to break altitude records will launch from a mountain to make the flight shorter.

To make the most of the fuel, the pilot will need to fly directly into the wind to generate more lift. The wing will also need to be trimmed to slow mode, this will also maximize lift to make the climb much quicker.

As altitude increases the fuel to air mixture that is being fed to the engine will become much richer. This will impact the power and performance of the engine, and will slow down the climb rate significantly.

This is another reason why pilots prefer launching from high altitudes before record attempts, as the mixture can be adjusted before launch.

Hypoxia is the main concern of pilots flying at high altitudes. The effects of high altitude on humans are considerable, and when the pilot reaches around 7,000 feet above sea level, the saturation of oxyhemoglobin begins to decrease rapidly.

The The Civil Aviation Authority recommends using supplementary oxygen for any paramotor pilot flying above 10,000 feet. If you plan on flying even higher than this it's important to understand the risks, and to carefully plan the flight.

Air pressure at 25,000 feet is so low that if you breathe unassisted, the oxygen in the blood stream actually exits the body rather than being taking on, this is why climbers have come to know 26,000 feet as the death zone.

All mountaineers use supplemental oxygen in the death zone to reduce deleterious effects, and all pilots will be using oxygen at this height.

In fact, all pilots who fly more than 30 minutes at altitudes of 12,500 feet or higher will be required to use supplemental oxygen by law. And at altitudes above 14,000 feet pilots must use oxygen at all times.

The higher you fly, the greater the risk of encountering another aircraft. This is why it's important to plan your flight carefully, and to issue a NOTAM so that other pilots know you are there.

There have been multiple near misses between fast moving aircraft and paramotors, and many of the faster aircraft have failed to take action to avoid a collision. This proves that paramotors are very difficult to spot depending on their angle and weather conditions.

No pilot is expecting to encounter a paramotor at any altitude above 5000 feet, so if you plan on beating your personal altitude record be sure to take all of the steps to improve your visibility, and be extra vigilant at all times.

Experienced paramotor pilot Kristianna Draper found out just how difficult paramotorists are to spot when she had a near miss with an RAF A400M at 2,200 feet. Read all about the incident here.

I've also experience a near miss with a faster moving aircraft as explained in THIS POST. This incident happened at around 1000 feet, so pilots should be aware of the risk of a mid-air collision at all altitudes.

This is another reason that careful planning is required before attempting an high altitude flight. Low or zero wind speed at takeoff will be the best conditions for this, but pilots should always check the winds aloft forecast before takeoff for their safety.

So how high can paramotors fly? well it seems that the limit still hasn't been reached, as pilots will continue to push the limits, and records will continue to be broken. The answer is currently 25,590 feet, but you can guarantee that someone will eventually come along and beat that record.

The thing that really limits how high paramotors can fly is the primitive 2-stroke engine, but with electric paramotors becoming more popular, and technology improving, this could push things to new limits, and see even higher altitudes reached.

Now you know how high paramotors can fly, find out how far they can fly HERE.