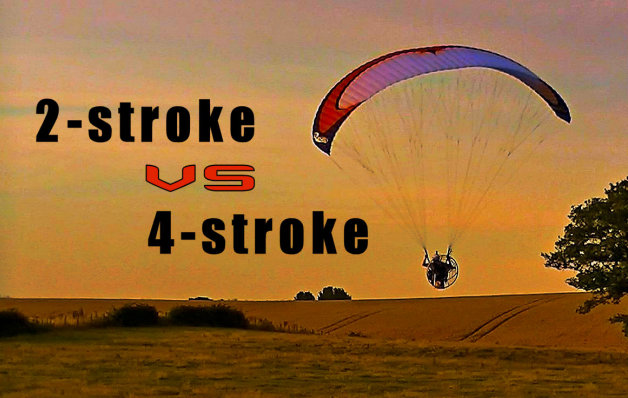 The biggest decision new pilots will need to make is which type of engine they want to buy. There are lots of differences between 2 stroke and 4 stroke paramotors, and they both have their perks, so let's look at all of the differences to help you decide which is the best choice for you.

2 STROKE VS 4 STROKE PARAMOTOR: THE ENGINES 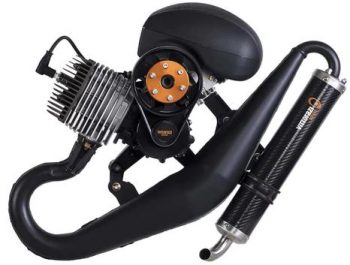 When paramotoring was born, the obvious engine choice was the 2 stroke. They're super light which made them easy to carry on the pilots back, and with their high revving capabilities, they easily produced enough thrust to lift pilots off the ground.

With fewer moving parts than 4 stroke engines, they're cheaper to manufacture, and they are also easy to repair, even in your garden shed! This made them the top choice of pilots and manufacturers for decades.

2 stroke engines get their name because they complete one power cycle, with two movements of the piston, or two strokes. This happens in a single revolution of the engine's crankshaft, and moves the piston up once, and back down once.

How do 2-stroke engines work?

As the piston moves up, it compresses this mixture by forcing it into the combustion chamber. The spark plug fires and ignites the mixture, which forces the piston back down. As the piston moves down, burnt fuel exits through the exhaust port, the fresh mixture is compressed in the crankcase, and the process starts again.

Carburettors are still fitted to most paramotor engines, but they do have a big downside: they cannot adapt to changing temperatures, altitudes, or other changes in your environment very effectively. This is not ideal for an aircraft, and it can lead to poor performance, problems starting, and excessive fuel burn.

Fuel injected 2 strokes are still very new to paramotoring. Many manufacturers have tried to produce a fuel injected engine over the years, but until recently they all proved too complicated to maintain, or far too unreliable.

Recently, K.I.C.A.S Engineering worked alongside Aviator PPG to produce an EFI (Electronic Fuel Injection) system that can be fitted to the Vittorazi Moster 185 engine, and it only weighs about 3 lbs.

It's been kept fairly top secret, but fuel injection systems usually use a pump that injects 2 stroke oil directly into the throttle body. This passes into the crankcase to lubricate the engines's internals, along with sufficient air.

At the same time, fuel is injected into the cylinder via two injectors that are placed in the transfer ports. The fuel mixes with the air and fires in the traditional way.

This technology was only introduced to the market in 2019, so it's still pretty new, but it's said to cut down on emissions, lowers fuel consumption, and improves starting and performance.

The downside? It's currently only available for the Moster 185 engine, and it will cost $1500 to have this system fitted, but Vittorazi may fit it as standard in the future. 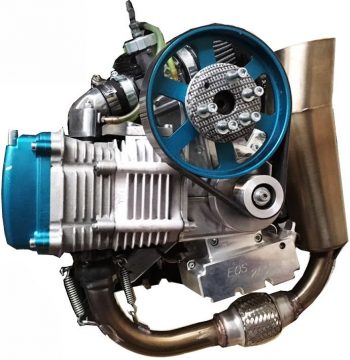 When new emission rules were introduced in 2006, 4 strokes suddenly became very popular in the dirt bike world, and many paramotor engine manufacturers are now following suit.

Although modern 4 stroke engines are producing more power than ever before, size for size they still can't match the power of a 2 stroke engine.

With the same cylinder capacity, 4 strokes will produce about half the power of 2 strokes, meaning that size for size they won't produce the same amount of thrust at the prop.

How do 4 strokes work

As with 2 stroke engines, there are both carburettor and fuel injected 4 strokes.

2. Compression stroke: this stroke begins at bottom dead centre, and as the piston moves up it compresses the fuel air mixture that has just been drawn into the cylinder. The stroke ends at top dead centre, both intake and exhaust valves are still closed.

4. Exhaust stroke: the piston starts at bottom dead centre, and as it begins to travel back up, the exhaust valve is opened. This forces the burnt fuel gases out through the valve, and into the exhaust port. The piston returns to top dead centre to start back at the intake stroke.

Fuel injected 4 strokes are generally only seen on wheeled paramotors like the Blackhawk Intruder 250 for example. Bailey Aviation were working on one (SEE HERE) many years ago, but we're still waiting for this to go into production.

Fuel injected 4 stroke engines use an injector that squirts fuel directly into the throttle body, where it is mixed with air. The process is exactly the same as with carburettor versions, but a computer controls the amount of fuel and air entering through the intake valve.

This computer communicates with the throttle and the injector, and it also reads engine RPM, temperature, crankshaft position, air temperature and oxygen content in the exhaust. This is essential to feed the exact amount of fuel and air into the engine.

Fuel injected 4 stroke paramotors have improved reliability, they also cut down on emissions and fuel consumption, and increase the engines performance.

4 STROKE VS 2 STROKE: THE PARAMOTORS 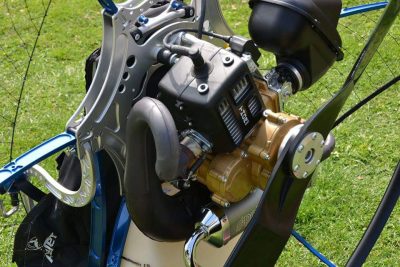 So now you know how the two engines differ, what difference does it make to the paramotor?

The first thing you'll notice when you look at a 2 stroke paramotor is the big exhaust pipe. These pipes look great, but they are there to serve a purpose, not just to look cool.

The big front pipe is known as the expansion chamber, and this is a special tuned exhaust pipe. This strange shape is designed to reflect the pressure waves that leave the exhaust port, back to the port, at a particular time in the cycle.

These tuned exhausts are essential for 2 stroke performance, but you won't find an expansion chamber quite like this on 4-stroke machines.

The second thing that stands out is the size of a 2 stroke engine. They are very small, and as previously mentioned, this makes them very light, which is important for pilots.

I mentioned earlier that you need to premix the fuel, this means mixing it with special 2 stroke oil before adding it to the paramotor's fuel tank. This is essential to lubricate the engines internals: piston, cylinder, etc, and without it the engine will overheat and seize solid.

Find out lots of information about 2 stroke oils, and find the correct oil to use in THIS POST.

Starting a 2 stroke is usually fairly easy, and a couple of pulls will usually be enough. Launching will feel strange to complete beginners, as the power delivery is very sharp and aggressive. This is because they have a very steep power curve, meaning there will be a sudden sharp increase in power at a certain RPM; this is called the powerband.

4 strokes lack the huge expansion pipe that is essential for 2 stroke performance. But as technology improves, we are seeing it on some of the newer 4 stroke engines in the dirt bike world. This may eventually be carried over to paramotoring to improve power and thrust.

Because the 4 stroke engine has valves, and cams to operate the valves, the top half of the engine is much bigger. This, with the addition of a sump full of engine oil, and a separate lubrication system, makes them heavier than a 2 stroke. A 4 stroke engine will usually weigh 10-20% more than 2 stroke engine.

Fuelling the 4 stroke paramotor is much easier than a 2 stroke, because you will not have to pre mix the fuel. As I just mentioned, the sump holds the oil needed for lubrication, so you don't need to add any extra to the fuel.

Starting a 4 stroke paramotor can be more tricky than a 2 stroke, this is mainly because of the higher compression. Because of this, many pilots choose the electric start versions.

Launching and flying the 4 stroke will be a totally different experience to the 2-stroke, as the power is delivered at a lower RPM. 4 strokes rev up with less momentum than a 2 stroke, but they still have plenty of power to launch and climb for light to medium sized pilots.

PARAMOTOR 2 STROKE VS 4 STROKE: WHICH TO BUY

It's really hard to say which one you'll like best until you fly them both, but because of the added weight, beginners usually opt for the 2 stroke engine.

If you're completely new to engine maintenance, and you plan on working on your own paramotor engine, a 2 stroke may also be appealing. With less moving parts, and the simplicity of the engine, they are very easy to maintain and rebuild when the time comes.

If you're a heavier pilot, you may find that most 4 stroke engines don't have enough thrust to offer. So again, a large 2 stroke engine will be the best option for you.

You've read the comparison, and you now have a good understanding of the differences between 2 stroke and 4 stroke engines, the next part is up to you.

Good luck with your choice!