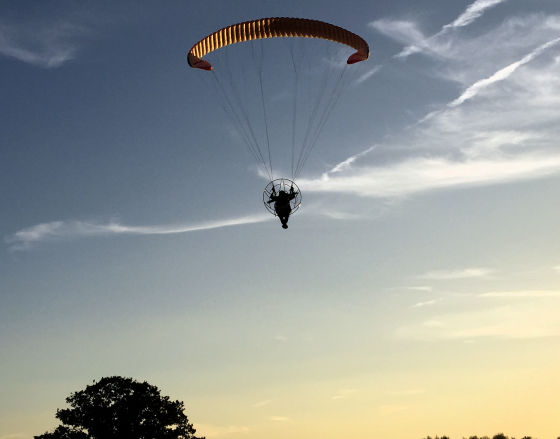 If you fly paramotors long enough, at some point you'll find yourself in the unpleasant situation of wanting to descend, but being completely unable to. I do most of my flying late evening in super calm conditions, but I've actually managed to get myself into this situation multiple times, and it's taken me completely by surprise.

So what happens? You release power completely, and strong updraughts, cloud suck, or thermals can cause you to maintain altitude, or sometimes you'll just keep going up.

If you're new to the sport, this could be a scary situation, so it's worth arming yourself with a few handy tricks to get you out of trouble.

So what do you do when this happens? Well, you need to use a fast descent technique, and one of the easiest, and maybe even the safest techniques you can use is big ears.

In this post we'll look at when to use big ears, and when not to. I'll tell you how to do it, and we'll also look at some of the risks of big ears.

Big ears is a manoeuvre commonly seen on paragliding hills, increasing the sink rate of the wing by twofold. Big ears basically lowers to surface area of the wing to decrease lift, and it's very simple to do.

How to pull big ears on a paramotor

To practice pulling big ears, park both brakes, and simply grab the outer A line on each side, and pull it down until the wing tip folds in.

Be sure to only pull the outer line, and not the rest of the A lines, as you'll cause a frontal collapse.

If your risers have split A's, you will be pulling the line that joins the second riser back, as you can see below.

You'll be able to pull the whole riser down, or you may find it easier to grab the line. Be sure to pull the split A riser, and not the B riser, and always check that the line runs to the outer A (leading edge).

You may find you need to pull the line quite a distance to get the tips to fold, and they may be very hard to pull down.

As each ear is pulled, you may feel the wing roll and yaw slightly, so although it's best to pull in one ear at a time in the beginning, try to pull both symmetrically once you are confident pulling big ears.

When you release the ears, they will usually pop straight out with no input needed. If they don't pop out, a light pump of each brake, one at a time, will re-inflate the tips, or you may be able to simply lean away from the affected side.

If both ears fail to re-inflate, be sure to only pump one side at a time. If you pump both brakes you may slow to wing down too much, which could cause a stall.

As with any new manoeuvre, practice big ears with plenty of altitude, preferably above 1000 ft. When you know what to expect from the manoeuvre, and how your wing reacts to it, big ears is safe to use at lower altitudes.

Big ears can be a very safe manoeuvre when used correctly, but there are a few things to be aware of.

When you reach up to pull the outer A lines, it's important to double check that you aren't about to pull the wrong lines, as this can cause a full collapse or a spin.

You can identify the correct lines by using a small piece of colourful electrical tape. Simply stick it to the outer A riser, and when you need to use big ears you won't have to waste time searching for the correct lines.

While pulling big ears you will increase the angle of attack, and the stall speed of your wing will be raised, so be very careful when using the brakes.

I recommend that you park the brakes, and use weight shift to make course corrections, you'll find weight shift much more effective than usual because of the decreased wing span.

You should also be aware that the stall speed of a wet wing will also be increased, so never use big ears if you find yourself caught out in the rain. Find out more about flying in the rain in THIS POST.

When you pull big ears, you basically make your glider smaller, and when you're suspending the same weight from a smaller wing, you have increased wing loading.

Many pilots (especially paragliding pilots) see this as an advantage, and they use big ears to reduce the collapse risk during strong turbulence and rotor. This leads pilots to take more risk, and they often end up launching in stronger, sometimes dangerous conditions.

Although the wing will be more collapse resistant, the collapse resistance you gain from using big ears may still fail to keep the wing inflated during strong enough turbulence. You'll also be taking your hands off the brakes, which means you loose the ability to fly actively.

When should you use big ears while paramotoring

Big ears is a great fast descent technique to use when you don't wish to loose ground speed, or make any course corrections.

There could be many reasons for this, but cross country and competition pilots may find it particularly useful, especially when time is of the essence. Paragliding pilots will also find it useful when they're close to a hill or mountain.

I've personally found big ears useful for outrunning bad weather and rain. Big ears won't affect your airspeed, but it will increase your ground speed, so you can use it when you're caught out. You don't want to be hanging around in the same spot doing wing overs, so pull big ears to get down lower, whilst continuing on your same heading with a faster ground speed.

Pilots may also find big ears a useful technique to use if they aren't accustomed to more advanced descent techniques, like wing overs, or spirals.

I've wrote about the dangers of spirals, and how they can produce high amounts of G-force HERE. This manoeuvre commonly causes G-lock, and many pilots have lost their lives because of it, so big ears is a much safer descent technique to use.

Of course, big ears will be a much slower descent than using more advanced techniques, but it will still help if you find yourself unable to descend, or if you're unable to change your heading for some reason.

I found a great video that you can watch below, where you can see some really good examples of big ears. Although the video shows paragliders, the technique is still the same for a paramotor wing, and everything that's said still applies to paramotoring.

Remember - big ears is a wing collapse, and although it's a controlled collapse, it still has its risks. So always stay high while learning big ears, and always check that your wing is capable of safely doing the manoeuvre before attempting it.

Practice the manoeuvre for an hour in stable air until you're confident, and until you know exactly how the wing will react.

Have fun learning this useful manoeuvre, and always keep your practice up, as you never know when you'll need to use it!!