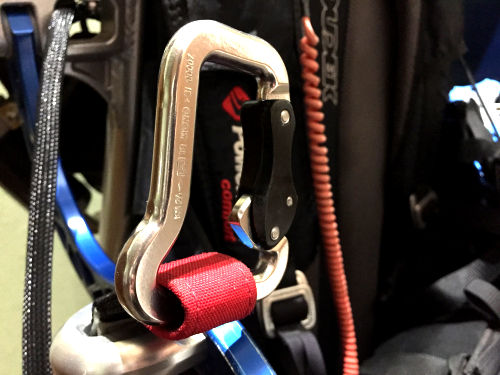 We're always told not to worry about our carabiners breaking; after all, even the cheap ones are rated to 18 KN! With a breaking strength this high they should never break, but unfortunately, although it’s rare, there have been cases of carabiners breaking.

In this post you'll find out how to choose the safest carabiners, how to look after them, and when to replace them. I'll share my recommended carabiners, and also help you decide whether you need to back them up, and how to do so if you choose to.

How strong are carabiners

Many pilots wonder why their carabiners aren't backed up by a second carabiner, or a safety strap, just like all of the most highly stressed harness straps. Well, it's simply because the carabiners are so strong, and so unlikely to fail that manufacturers feel it's unnecessary.

So how strong are they?

Take a look at your carabiners, and you'll see a rating that looks something like KN 26. If you don't see a rating then don't use them for paramotoring or paragliding.

This rating means that the carabiner will handle a load of up to 26 kilonewtons along it's spine. 1 kilonewton is equal to 101.97 kilograms, so 26 KN equals 2651 KG. 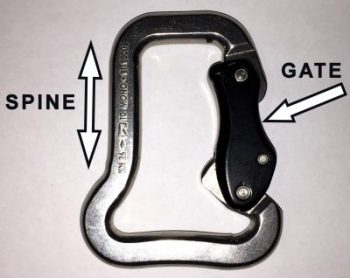 This means each carabiner will easily hold the weight of a fairly large car, and we have two of them. So you can see why manufacturers don't bother backing up the main carabiners.

As previously mentioned, it's very rare for a carabiner to break, but a recent incident had a lot of pilots questioning just how safe carabiners really are.

A video was posted online that clearly showed a carabiner suddenly breaking during a tandem flight. The pilot was pulling a gentle spiral, probably less than 2 G's, when the carabiner seemed to open up, and snapped along its spine.

Unfortunately the pilot didn't survive, so it's unclear whether a pre-flight inspection was carried out, or how many hours the carabiner had been used for.

This wasn't the first time a carabiner had failed though. A few years back a pilot landed as normal and unclipped his wing. As he did so, one of his aluminium carabiners split in two.

DHV Testpilot Mike Küng also experienced a broken carabiner during a normal launch. The problem was found to be an oscillating crack initiated in the chrome finishing layer.

So what can we learn from all of this?

All of these incidents happened while the pilots were using aluminium carabiners. Aluminium carabiners are generally very reliable, but you need to take care of them. Small surface scratches can turn into cracks, so protect them during transportation, and inspect them before each flight.

Whether you're using aluminium or steel carabiners, they will only have a certain lifespan. Repeatedly applied loads will eventually cause fatigue in all carabiners, so replace them as recommended by the manufacturer, or every 100 hours.

Other things to remember:

My recommended carabiner is the popular AustriAlpin Powerfly Inox. I've been using this carabiner ever since I heard of the problems with aluminium carabiners. Inox" is short for "acier inoxydable", which is French for "stainless steel".

The Powerfly Inox features an autolock mechanism, and is suitable for general paramotoring and acro. It's super strong and rated to 26 KN across its spine, and 15 KN across its gate, meaning you're still safe if it happens to twist during launch.

AustriAlpin say it will last 5 years, or 1500 hours of flying, whichever comes first. Although it has such a long lifespan, I still change mine yearly.

You can check out this popular carabiner on eBay here > AustriAlpin Powerfly Inox.

Do you need to backup your paramotor carabiners?

If you want total peace of mind, it is possible to backup your carabiners. But is it necessary? If you're using stainless steel carabiners like the AustriAlpin Powerfly Inox, then I think not. But if you need that extra boost of confidence in your equipment then it certainly won't do any harm.

When I started flying I was using aluminium carabiners, and I did back them up. But since using the stainless steel carabiners I haven't bothered.

Since the earlier mentioned accident involving the tandem pilot, many paramotor pilots have decided to install a backup. This can be done quite easily on most paramotors by using a soft shackle, or like I did by using a soft link like the Supair Connect.

Unfortunately, most riser loops will not accept two carabiners, so a soft link is the only thing that will work. The Supair Connect is rated to 2400 daN, or 2447 KG, so it will provide an excellent backup.

Simply connect the soft link to your riser loop and leave it there permanently. You can then attach a second carabiner to your harness or your hang point, either through an existing loop, or one you have created with a second Supair Connect, depending on how far the soft link will reach.

Do this on both sides so that you can quickly and easily clip into your backup before every flight. When connecting the backup to your harness, be sure to choose the strongest point, as it will need to take a lot of weight. 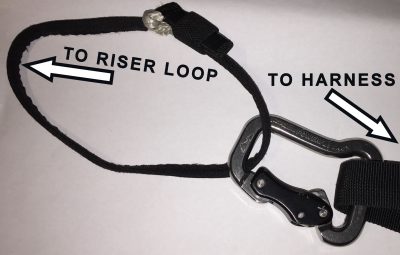 Any more carabiner tips are welcome in the comments below!

Now you know all about carabiners, check out my biggest mistakes HERE