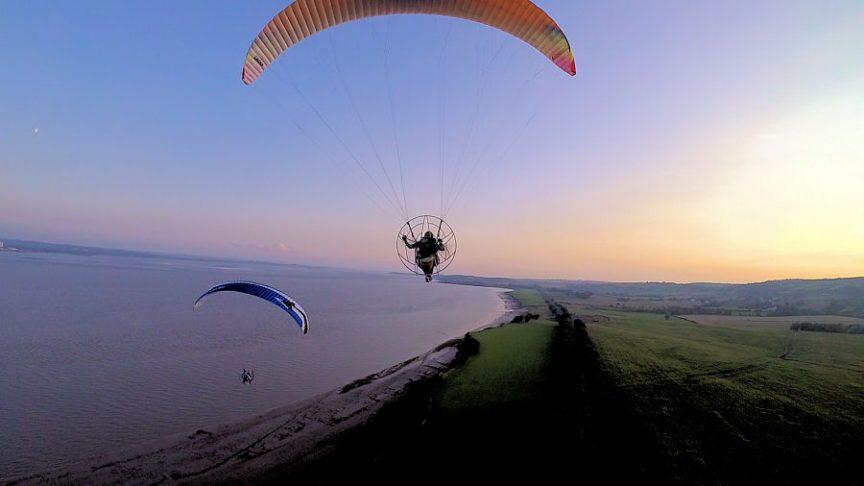 If you're looking for a new place to mount your action cam, or if you want to film your flights from a totally different perspective, a paramotor chase cam is a great option. I've been using the Skybean chase cam for about 6 months now, so in this post you'll find out whether it's any good, and whether it's worth your investment.

What is a paramotor chase cam?

If you're new to chase cams, you're probably wondering how they work, and the idea is actually very simple. You take an action cam, fix it to a giant shuttlecock, attach it to your wing, and drag it along behind you as you fly!

Although it sounds very simple in theory, getting the chase cam to fly straight and level, without wobbling around so much that it makes the video unwatchable, is actually quite difficult.

Many people attempt to make their own chase cams, and although I have seen one or two good ones, the footage and pictures are usually quite disappointing.

It may me possible with a lot of trial and error, and I was tempted to make my own, but I really didn't like the thought of being the test pilot for something that could potentially get caught in my prop, and wind the wing in mid flight. And that's why I decided to try the Skybean ChaseCam.

Before we get to it, you can check the current price of the Skybean ChaseCam at their eBay shop HERE.

When I first heard about the Skyben Chasecam I was super exited. Finally you could buy a paramotor chase cam that was fully tested and ready to fly!

Initially, the cost of the chase cam put me off, but Skybean are selling to a niche market with a fairly low volume, so to be fair to them, their prices are justified. So eventually after much umming and ahhing, I bit the bullet, and went ahead and bought one.

I bought it from eBay, and it was sent directly from the Skybean HQ in Slovakia. Overseas postage was fast and free, and the chase cam turned up in a neat little box ready for assembly. 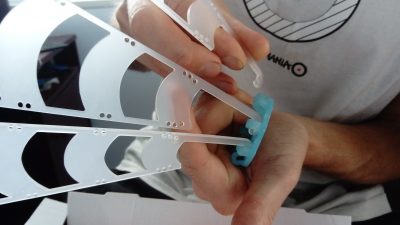 Assembly took about 45 minutes as you have to thread the provided laces through each fin of the chase cam. I found this easy enough to figure out, but Skybean also have some great videos on YouTube to help you if you get stuck. 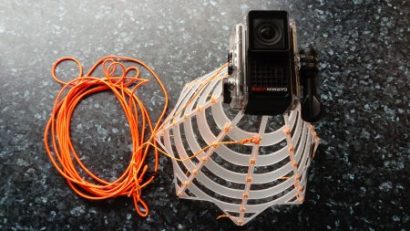 After all of the laces are tied up, you will fit the main line which has a sprung clip that attaches to your wing. The line is good quality, but the clip was bent and really could have been better.

As you can see above, I fitted my Garmin Virb to the universal camera mount, and the next step was to balance the chase cam. This involves sticking the supplied sticky weights to the fins of the chase cam until it hangs level.

And that's it, the chase cam is assembled and ready to take for a test flight!

When it came time to test the chase cam I felt very confident as it'd already been tested by hundreds of pilots. I doubt I would have been as confident flying with a homemade chase cam!

I powered up my Garmin Virb, and clipped the main line onto the centre line of my wing. It's important that you don't clip the chase cam onto your brake lines, choose the D lines. If you're unsure of where to clip it, Skybean have another helpful video that you can watch on their YouTube channel.

When the chase cam was clipped to my wing, I stood it directly in the centre between myself and the glider, and coiled up the main line so that it would unwrap as my wing came up.

I launched the wing and felt a little resistance as the wing dragged the chase cam along the ground. The chase cam soon began flying as I picked up speed, and when I was off the ground the wing flew as normal.

Turning and manoeuvring weren't affected in any way, but you need to remember that the chase cam is back there. If you fly low there is a chance that it could snag on high objects like trees and hedges, so keep a good distance from all objects.

I landed and checked the footage to find that the camera had been filming very low, and my wing wasn't visible. This is easily solved by shortening the main line. I didn't want to cut the line in case I went too short, so I tied a loop in it to shorten it a few feet.

I took another flight to check the length, and this time the footage was perfect. As you can see below, the whole of the wing was in the shot, and you can see more ground than sky, which is just how I wanted it. 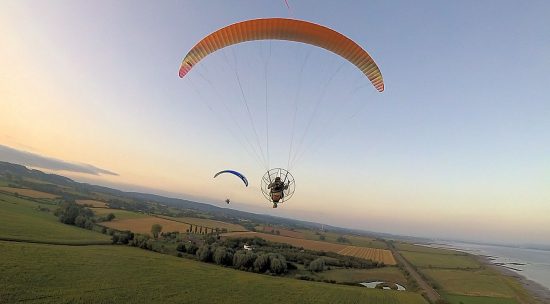 Would I buy another skybean chasecam?

The Skybean ChaseCam is well built, and also very tough. Because of the way it's assembled, with string, it's able to flex and move as it impacts the ground on landing. I've had over 50 landings with the Skybean ChaseCam and it's showing no signs of damage so far!

So would I buy another? Well I've just bought a new GoPro hero 7, so I will soon be buying another one, as the one I have has the universal mount. Skybean chase cams are available with a housing that will accept GoPro action cameras, so you won't need to install a mount before use.

So there you have it, the Skybean ChaseCam. You can check the current price at Skybean's eBay shop by clicking HERE.

Check out some more gear in the recommended gear section HERE.