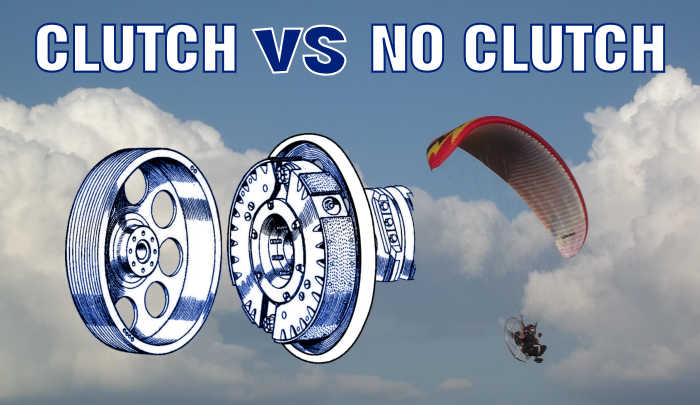 When you buy your first paramotor, one of the biggest decisions you'll need to make is whether you'd like a clutch or not. You'll find plenty of arguments in favour of both options, so in this post we'll look at the pros and cons of each to help you decide which setup to buy.

What does a paramotor clutch do?

Before we get to the pros and cons of each setup, let's find out what a paramotor clutch actually does.

Paramotors use a clutch known as a centrifugal clutch, this is the same type of clutch as you'd find on mopeds, chainsaws, go-karts etc. These clutches use centrifugal force to operate, meaning there's no clutch lever like you'd find on a dirt bike for example.

When the engine speeds up (because the pilot has pulled the throttle), the clutch engages so that the propeller can spin to generate the thrust needed to takeoff.

IS THERE ANY EXTRA SKILL NEEDED TO FLY A PARAMOTOR WITH A CLUTCH?

Because these clutches are completely automatic, there's no extra skill required to fly a paramotor with a clutch. The clutch slips automatically to avoid stalling the engine (in a car, the driver must slip the clutch), and there's no extra controls to operate.

Paramotor clutch vs no clutch

Now you know how a paramotor clutch works, let's find out which setup will be the best for you. 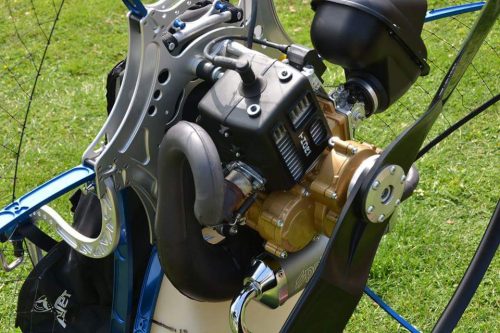 Without a clutch these extra parts are not needed, so a clutch will obviously add weight to the paramotor. On average, a clutch will add around half a kilogram of weight, not much, but lots of small additions will add up, so bare this in mind when deciding.

When you add more moving parts to an engine, you're also reducing reliability. Centrifugal clutches are generally extremely reliable, but clutch plates will eventually wear out and need replacing. But don't worry, most clutches will last way past the 150 hour mark.

If you've never worked on an engine before, replacing worn out parts can be daunting, but a centrifugal clutch is very easy to replace. Many manufacturers will offer tutorials to help you with this, and although all engines will vary, the short Vittorazi tutorial below will help you to understand how easy this task is.

The main reason for a pilot to choose a paramotor with a clutch is for the safety they offer. I've seen many a wing get minced by non clutched engines, and a simple mistake can end up costing thousands.

This risk can be reduced by starting your engine after you have clipped in, but as you may or may not know, this can be very difficult, especially on a non clutched engine. For this reason, if you choose an engine without a clutch, you may wan't to opt for an electric start.

I also posted about a pilot who's hand was dragged into his spinning propeller on a non clutched paramotor. This happened because the throttle cable was able to pass through a gap in the netting around the cage. The spinning propeller quickly snatched the cable and pulled it in, along with the pilot's hand that was attached to the throttle via the velcro strap.

You can go to that post and find out what happened to the pilot HERE. 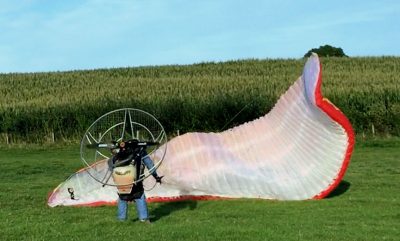 Clutched paramotors can also have a disadvantage on the ground!

During training you'll learn that if you feel a launch going wrong, you need to hit the kill button immediately to stop the propeller spinning. This is done to prevent the propeller shredding the wing if the wing happens to fall down onto it.

The propeller on a paramotor without a clutch will stop spinning almost immediately. But the propeller on a clutched paramotor can continue to spin for a number of seconds after the engine has been stopped. This means a shredded wing is more likely if you fail a launch.

Clutched engines have also caused a problem during landing for many pilots.

We're all taught to kill the engine before landing to stop the propeller spinning. Again, the propeller on a clutched engine will continue to rotate, and if the engine hasn't been stopped soon enough, it may still be spinning after you've touched down, meaning the wing can potentially fall into it causing damage.

Obviously this one's easy to avoid, simply by stopping the engine sooner before landing.

Starting a paramotor that doesn't have a clutch will be slightly more difficult, simply because you are also turning the propeller when you pull the chord.

If you choose an electric start this is not an issue, but definitely something to bare in mind if you are opting for a pull start engine.

Clutched engines are completely disconnected from the propeller during startup, so pulling the chord will take a lot less energy, and less strength. If you have any arm or shoulder weakness, you may prefer a clutched engine.

Other things to bare in mind

In my book that you can find HERE, I talk about the importance of the propeller strap. A propeller strap will almost completely eliminate the possibility of a prop strike, and minced body parts.

This is the most common accident in the sport, and it has left so many pilots with life changing injuries.

Unfortunately, you cannot attach a propeller strap to a non clutched engine; because as you know, without a clutch the propeller must always turn while the engine is running, so it simply isn't possible. 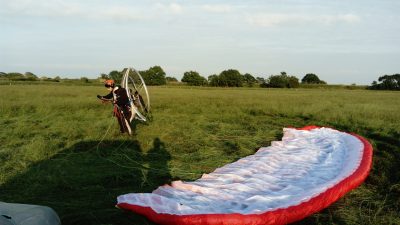 While clipping in for a forward launch, the propeller will be spinning and generating a small amount of wash. My first paramotor didn't have a clutch, and occasionally I would turn around to find that the wash had blown my wing and ruined my layout.

This will be annoying more than anything, but if it goes unnoticed it may easily cause a failed launch.

The propeller of a paramotor that has a clutch will continue to rotate very slowly in flight, even when the engine isn't running. A spinning propeller will cause more drag, so if you enjoy thermalling, a non clutched engine may be more appealing.

So should I choose a clutch or no clutch?

Now you have all of the above points to consider, the choice should be a little easier to make. But if you're still unsure read on the find out why I personally prefer a paramotor with a clutch.

Why I prefer a paramotor with a clutch

I've flown both clutched and clutch-less paramotors, and I personally think the pros of a clutched paramotor outweigh the risks of a non clutched machine.

There is a little more risk of shredding a wing during a launch run, but if you practice your launches regularly, and perfect them in a ground handling harness before adding the engine, your risk will be much lower.

Personally, I've never been close to shredding a wing with a clutched paramotor. I've had my wing fall onto me after landing many times, but as I mentioned earlier, simply kill the engine in good time and this isn't a problem.

For me, eliminating the risk of my wing being dragged into the prop, and reducing the risk of prop strike are also BIG bonuses of a clutch. I've seen many accidents since entering the sport, and many of these would have been prevented if the pilots had chosen a clutch.

This isn't to say that you will be completely safe with a clutched paramotor, as there are still many dangers to consider, but I believe many of the risks are reduced.

Thanks for checking out this post, good luck with your choice!