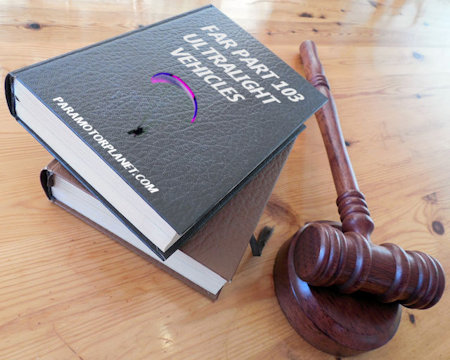 If you fly a paramotor in the U.S you'll be operating under Federal Aviation Regulation (FAR) part 103. FAR 103 Provides guidance to the operators of ultralights in the United States and establishes rules governing their operation. Paramotor laws are very relaxed compared to many other forms of aviation, but they must all be fully understood before taking to the air.

FAR 103 applies to readers in the united states only. This is post number two defining paramotor laws, check out the first article > HERE <. If you haven't read part one check that out first. Read to the point where this article is linked and then come back.

Far 103 defines ultralight vehicles in two categories: powered and unpowered. To be considered an ultralight vehicle, a hang glider must weigh less than 155 pounds; while a powered vehicle must weigh less than 254 pounds; is limited to 5 U.S. gallons of fuel; must have a maximum speed of not more than 55 knots; and must have a poweroff stall speed of no more than 24 knots.

Both powered and unpowered ultralight vehicles are limited to a single occupant. Those vehicles which exceed the above criteria will be considered aircraft for purposes of airworthiness certification and registration, and their operators will be subject to the same certification requirements as are aircraft operators.

These rules for ultralight vehicles are needed to achieve an acceptable level of air safety by reducing potential conflict with other airspace users and to provide protection to persons and property on the ground.

FAR 103 governs the operation of ultralight vehicles by specifying the airspace which requires prior authorization of Air Traffic Control (ATC), prohibiting operation over congested areas, and providing for operations during twilight hours with proper lighting. Right-of-way and minimum visibility rules are also established.

The FAA has chosen not to promulgate Federal regulations regarding pilot certification, vehicle certification, and vehicle registration, preferring that the ultralight community assume the initiative for the development of these important safety programs.

The ultralight community is expected to take positive action to develop these programs in a timely manner and gain FAA approval for their implementation. Should this approach fail to meet FAA safety objectives, further regulatory action may be necessary.

The operations of ultralight vehicles are now a significant factor in aviation safety. The vehicles are routinely operated, without authorization, into regulated airspace, such as airport traffic areas, terminal control areas, positive control areas, and prohibited and restricted areas.

Many operations have also taken place over congested areas and spectators and into adverse weather conditions in which operations may be conducted by pilots and aircraft which are qualified for instrument flight (IFR conditions). The midair collision potential presented by unauthorized operations is contrary to the FAA responsibility of ensuring the safety of all airspace operations including air carrier aircraft.

To illustrate the potential for hazardous situations that can arise, the FAA has recorded data detailing numerous instances of ultralight vehicles in controlled airspace causing near-miss situations with aircraft. The following examples highlight the problem:

(1) On March 24, 1981, an MU-2 flew between two ultralights operating off the end of the runway at Winter Haven, Florida. Both ultralights were equipped with floats and were operating at night without lights.

(2) On April 11, 1981, a Western Airlines 727 captain reported a near-miss with an ultralight vehicle in the vicinity of Phoenix, Sky Harbor Airport.

(3) In May of 1981, the pilot of a single engine aircraft reported a near-miss with an ultralight vehicle near Paso Robles, California. According to the report filed under the FAA Aviation Safety Reporting Program the ultralight was operating at 7,000 feet in IFR weather conditions. The airplane pilot, who was operating on an IFR flight plan, was forced to take evasive action to avoid a collision.

To establish regulations to deter flights which present a serious danger to aircraft and to provide a basis for necessary enforcement action the FAA published Notice of Proposed Rule-making No 816 on July 27, 1981 (46 FR 38472). That Notice proposed to include both powered and unpowered hang gliders under the generic term "ultralight vehicle'' and included proposed weight and fuel limitations for those vehicles.

The Notice proposed a number of operational limitations for ultralight vehicles, while recognizing that the vehicles are used primarily for sport purposes. More than 2,500 persons and organizations submitted comments to that proposed rule. This rule is the result of FAA consideration of those comments in light of its responsibility for safety in the National Airspace System. Because of the growing significance of this segment of the aviation community, the new rules were codified under a new part of the Federal Aviation Regulations, Part 103.

(1) Weighs less than 254 pounds empty weight, excluding floats and safety devices which are intended for deployment in a potentially catastrophic situation;
(2) Has a fuel capacity not exceeding 5 U.S. gallons;
(3) Is not capable of more than 55 knots calibrated airspeed at full power in level flight; and
(4) Has a power-off stall speed which does not exceed 24 knots calibrated airspeed.

(a) Any person operating an ultralight vehicle under this part shall, upon request, allow the Administrator, or his designee, to inspect the vehicle to determine the applicability of this part.
(b) The pilot or operator of an ultralight vehicle must, upon request of the Administrator, furnish satisfactory evidence that the vehicle is subject only to the provisions of this part.

No person may conduct operations that require a deviation from this part except under a written waiver issued by the Administrator.

(a) Notwithstanding any other section pertaining to certification of aircraft or their parts or equipment, ultralight vehicles and their component parts and equipment are not required to meet the airworthiness certification standards specified for aircraft or to have certificates of airworthiness.
(b) Notwithstanding any other section pertaining to airman certification, operators of ultralight vehicles are not required to meet any aeronautical knowledge, age, or experience requirements to operate those vehicles or to have airman or medical certificates.

(c) Notwithstanding any other section pertaining to registration and marking of aircraft, ultralight vehicles are not required to be registered or to bear markings of any type.

(1) The vehicle is equipped with an operating anticollision light visible for at least 3 statute miles; and
(2) All operations are conducted in uncontrolled airspace.

No person may operate an ultralight vehicle over any congested area of a city, town, or settlement, or over any open air assembly of persons.

No person may operate an ultralight vehicle within Class A, Class B, Class C, or Class D airspace or within the lateral boundaries of the surface area of Class E airspace designated for an airport unless that person has prior authorization from the ATC facility having jurisdiction over that airspace.
[Amdt. 103–17, 56 FR 65662, Dec. 17, 1991]

No person may operate an ultralight vehicle in prohibited or restricted areas unless that person has permission from the using or controlling agency, as appropriate.

§ 103.20   Flight restrictions in the proximity of certain areas designated by notice to airmen.

No person may operate an ultralight vehicle except by visual reference with the surface.

No person may operate an ultralight vehicle when the flight visibility or distance from clouds is less than that in the table found below. All operations in Class A, Class B, Class C, and Class D airspace or Class E airspace designated for an airport must receive prior ATC authorization as required in §103.17 of this part.

That just about wraps up all of the paramotor laws you'll have to follow. Read this post again and bookmark it for future reference. Remember, paramotor laws and FAR 103 exists for your safety, so know them well and stick to them.

If you've just started paramotoring check out some of my safety articles..

Discover the most common causes of accidents in the sport > HERE.

Find out whether a wing collapse is inevitable > HERE.

And if you haven't bought any gear yet, find out everything you'll need before taking to the sky > HERE.