It's rare to hear paramotor pilots talk about their mistakes, and you'd be forgiven for thinking mistakes are fairly uncommon. But the truth is that most pilots have a few scary stories to tell. I made a few mistakes when I first started flying, and also a fairly recent one that we can all learn from in this post.

We're all taught to carry out a full pre-flight inspection of our equipment before takeoff, this means checking the wing, harness, frame, and engine. I'd only flown my own paramotor once for around 45 minutes, and I had done a full check before that first flight.

Because the flight was so short, I decided not to check it again before launching for the second flight. This was a big mistake, as the oil nipple on the clutch has started to vibrate loose.

I'd only been in the air for around 30 minutes when I heard a loud bang, and felt a sudden sharp movement of the paramotor. I landed immediately to find the oil nipple had fallen out and struck the wooden propeller. I'd lost the screw, and about half of the one propeller blade. 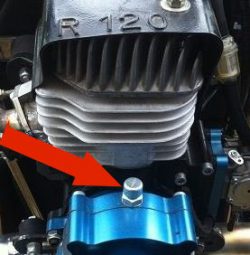 Mistake number two also happened during training, but it was during the second part of my course. This was the intermediate course, which I took 4 months after the beginner course.

At this point I'd done very minimal paramotoring, about 10 hours flying. Ten hours may seem a good amount to some of the beginners reading this, but I personally class anybody with less than 100 hours very new to the sport.

So I was still very much a newbie, and I launched on a very calm evening, flying a sluggish beginner wing. Although I was receiving intermediate training, my instructor was launching beginners below me as I flew circuits.

I flew directly over the launch field, right at the point a beginner launched below me. The other pilot was at full throttle, and quickly climbed to my altitude. I flew up beside the other pilot, approaching him from behind, and joining him on his right, this meant that he didn't know I was there (first mistake).

I could see that his left brake was parked, and he was struggling to get into his seat. He was using his left hand as he tried to pull himself into the seat, and his right hand was still holding the right brake toggle.

Suddenly, during the struggle, the pilot accidentally pulled hard on his right brake. Luckily my eyes were still on him, and I saw him heading straight at me.

Unfortunately, my sluggish wing didn't react very fast as I also pulled hard right to avoid him. There was no way I'd be able to avoid him, so I also hit the throttle. I was still pulling hard right, full throttle, and I just managed to gain enough height that he passed directly beneath me, missing me by inches.

My third mistake happened after about 25 hours flying, and happened simply because of a lack of knowledge. I was slowly gaining confidence, and I was beginning to fly in more active weather conditions.

I had recently spoken to a paragliding pilot who told me to pull brake to about shoulder height during turbulence, to help keep the wing inflated. This is good advice for pilots flying classic wings, but I was flying a reflex wing.

I took off mid summer at around 4.30 PM, so the air was still very active. I was hitting some fairly large thermals, so I took the paragliding pilots advice and pulled on the brakes.

I flew around for 20 minutes before I'd had enough of being thrown around, so I decided to land to wait for the smoother evening air. I came in to land still holding about a foot of brake. I flared at the normal height, but the flare was useless and the wing stalled immediately. The landing was very hard, braking my second propeller, and putting a kink in my cage.

This mistake happened after more than 400 flights, and was caused by two things:

1. I had landed at an unfamiliar field, surrounded by hills and trees that were causing a lot of rotor.

I was a 20 minute flight away from my planned landing zone, and I needed to get back there as my vehicle was there. I saw another paramotor pilot below, and he was signalling me to land.

Sunset was minutes away, but in the UK we can fly until 30 minutes after sunset. So I knew I had time to land to check the pilot was OK, and to get back in the air to fly home.

I landed and had a quick chat before setting up for a launch. The sun had set, so I was in a rush to get airborne. There was no windsock, so I threw up some grass to get a reading on the wind.

There were some nasty ruts in the field, but the grass gave me a clear reading, meaning my takeoff run would miss all of the dangers. I ran forward to launch, but the wing quickly swung around to the left. I kept running as I knew I wouldn't have time to setup again, as it was getting dark.

I was now running 90 degrees to my planned takeoff run! I must have got a false reading on the wind due to rotor from the trees and a nearby hill. This run sent me straight toward the ruts, but I could feel lift so I kept running, but I didn't quite make it before the ruts.

I hit the ruts and tripped over. The cage and propeller hit the ground, breaking a chunk out of the propeller, and tearing through the cage netting.

This post was all about mistakes that can happen while paramotoring. If you haven't started flying yet, check out some newbie mistakes that you'll need to avoid when buying equipment and training HERE.

There's lots more mistakes that other pilots have made that we can also learn from. Check out my prop strike post HERE, and my accidents post HERE.

If you have any of your own mistakes to share, feel free to leave them in the comments below to help other pilots.