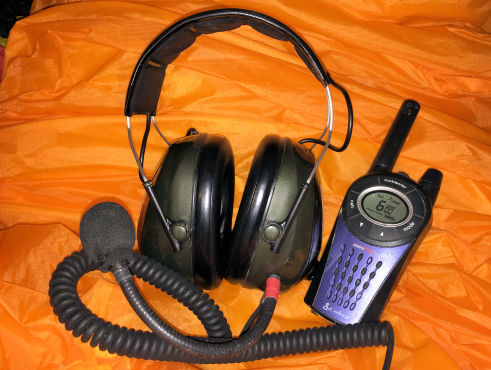 If you fly with other paramotor pilots, or if you venture into or near to controlled airspace, then a radio or communication system is essential. In this post we'll look at all of your radio options, and we'll run through 5 of the best radio choices for paramotoring.

All paramotor radios will transmit on certain frequencies, some are legal for personal use and some require a license. Before buying a radio you should always check what frequency range it transmits on.

FRS is a system used in the US which uses frequencies around 462 and 467 MHz in the ultra high frequency (UHF) band. You'll find that most walkie talkies fall under this category, and they do not require a license.

No FRS radios are legal to use anywhere in Europe. These frequencies are allocated to the emergency services, including the fire brigade in the UK, police in Russia and commercial users in Australia.

GMRS radios and walkie talkies are also very common, but these radios require a license that costs about $90 for 5 years in the US. There's no exam involved, just an application and the fee, but this fee costs more than most radios, making them less popular.

Hybrid FRS/GMRS radios are also available and these will not require a GMRS license for power up to 2 Watts, but the higher power channels will still require a license.

This is the license free system for paramotor pilots in Europe, transmitting on 446 MHz. Similar to the US FRS system it operates on the UHF band, and is free for personal use in most European countries.

You'll find a massive range of walkie talkies and 2-way radios using PMR446, and you'll have 16 channels to choose from.

LPD433 is another system that is being introduced in Europe. It operates on 433 MHz so it won't be legal outside of Europe without a license. It's license free in some European countries, but it isn't legal everywhere, so check that your country allows it before buying a radio operating on this frequency.

FRS or PMR466 radios are the cheapest way to communicate, but because they are license free, you will hear other people on your chosen channel from time to time. This is why many paramotor pilots are now switching to 2M radios.

These radios use the very high frequency band (VHF) from 144 MHz to 148 MHz, but you will need to pass an exam to acquire a Ham license.

Many beginners make the mistake of buying an aviation radio when it really isn't necessary. You'll only need one if you're flying into, or very close to controlled airspace, to talk to Air Traffic Control.

If you think you need an aviation radio then you will need to learn how to talk to Air Traffic Control, and pass an exam to obtain a license.

What most paramotor pilots want from a radio is quite simply the ability to communicate with their flying buddies. They have no need to talk to other aircraft or Air Traffic Control, and all communication will happen at close range, or less than half a mile.

Sena dominate the Bluetooth communication market, and their SMH 10R-01 has become a very popular choice with most paramotorists, including myself. 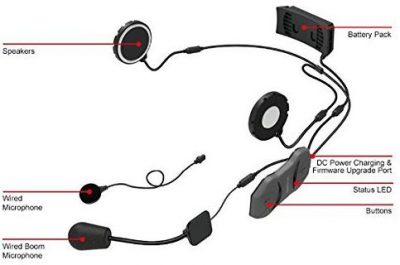 The system can be installed to any helmet, it's super lightweight, and it's compatible with all other Bluetooth communications systems on the market. This means that you will be able to pair and communicate with pilots who are using a different brand of communication system.

One thing that stands out about the SMH 10R-01 is the noise cancelling. A paramotor engine just inches from your head, along with the wind noise while flying makes it near impossible to communicate using a standard radio. The Sena will boost audio levels in loud environments, while noise control technology reduces unwanted background noise, and the result is crystal clear audio on both ends.

Something else that makes these a popular choice with paramotor pilots is the GoPro action camera compatibility. This means you can record your voice in sync as you film. If you've ever watched a paramotor vlog and wondered how they're recording their voice so clearly, it's probably been done using one of these.

The SMH 10R-01 will even pair with your phone! So if you want to contact pilots who are further away than half a mile, The Sena Ride Connected app will let you communicate at any distance over the cellular network.

Check the current price of this system on Amazon here > Sena SMH10R-01.

Baofeng radios  have become very popular with paramotorists over the last few years. They offer features you'd expect to see on much higher priced radios, at much more affordable prices.

The UV-5R and UV-82 are the most popular Baofeng radios in the paramotor community, but bare in mind that they are classed as a 2-meter radio.

The UV-5R (link to Amazon) is super compact at just 100 mm in length, it accepts the standard two pin headset plug, and it's super cheap making it a very popular choice.

The newer UV-82 is a little more expensive, but still very cheap for what it has to offer. You'll get everything the UV-5R offers, plus a more solid case with bigger buttons, as well as the latest BaoFeng chipset and PCB board that outperforms the range, accuracy, and output of all previous BaoFeng chipsets.

Check it out on Amazon here > Baofeng UV-82

Although the Baofeng radios are very popular, not everyone wants a cheap radio. They seem pretty reliable, but there have been a few complaints.

A popular choice and a well respected brand that comes into the higher price range, is the Yaesu FT-60R. It's still very affordable at around $170 and you're getting a super reliable well rated unit, as you'll see by the reviews on Amazon HERE.

Another Yaesu radio that has been popular with both paragliding and paramotoring pilots is the FT-270R (link to Amazon). These are known for reliability, ruggedness, and all round quality. If you want a higher quality radio with excellent reception and ease of use, this is the one. 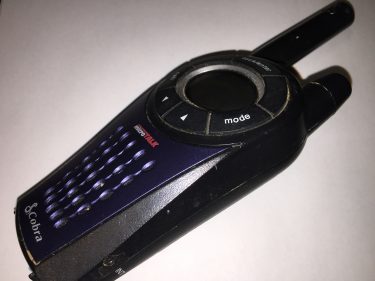 When I learned to fly, my instructor was using PMR446 walkie talkies. He'd use them for hours, and then throw them into a box at the end of the day. These things were bullet proof, so I decided to buy a couple for myself.

These radios are the Cobra MT975 (link to Amazon), I've had them for 6 years and they're still going strong. It's also proven to be popular with many other paramotor pilots.

Obviously they're only legal in Europe, so US readers will need to buy the equivalent Cobra PR562BLT FRS radio (link to Amazon).

These walkie talkies plug into any headset with a 3.5 mm jack plug connector, so be sure it will fit your headset before buying.

We've already discovered that Yaesu 2-meter radios offer exceptional quality and performance, and their aviation radios are no different. The Yaesu FTA-250L will offer everything you need for flying into controlled airspace.

I'm recommending this purely based on paramotor pilot reviews and recommendations as I've never owned an aviation radio. I'm not licensed, and I've not taken the exam, so I won't go into anymore detail on something I'm not up to speed with.

If you need an aviation radio and you have your license, you can see more about this radio on Amazon here > Yaesu FTA-250L.

When you have your radio you'll also need a helmet so check out the top choices HERE.