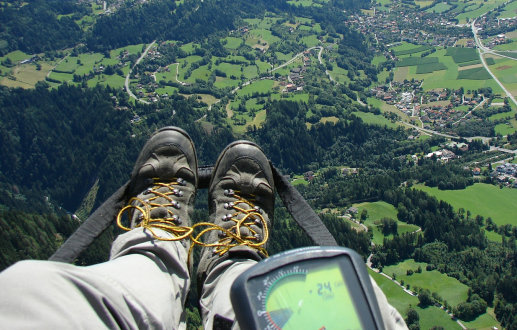 We all love flying long distances, but the low speed of a paramotor can really limit how far we can fly. We can use the wind to help us get places faster, but sometimes there is no wind, or even worse - we're battling a strong headwind. So what's the answer? Speed bar!!

Some pilots compare speed bar to pushing an accelerator, and although it varies with different wings, you could add over 10 mph to your top speed!

In this post you'll find out what a speed bar is and how it works, we'll look at how and when to use it, and we'll find out if there are any risks involved with its use.

What is a paramotor speed bar?

Look for two small pulleys attached to the front of the risers, with a Dyneema line running through them. The Dyneema line is known as the speed bar line, and at the end of the line you'll find a Brummel hook that is used to connect the speed bar. 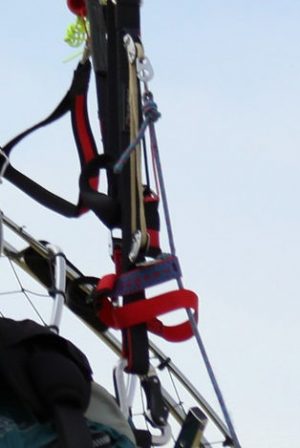 Once connected, the speed bar will also run through two pulleys on the harness that keep it in place behind your heels. 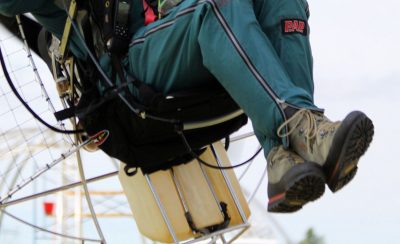 When you need to use it, you simply slide your feet into the loop and activate it by extending your legs.

How does the speed bar work?

The speed bar works by pulling down on the A, B, and C risers and lines, to change the angle of attack of the wing. As speed bar is activated, the angle of attack is reduced, and so is lift. This gives you more airspeed, and allows you to increase power; it also makes to wing incredibly stable.

When to use speed bar

There's several situations that could arise while flying when you will be glad of the speed bar.

We all tend to avoid strong wind, but every pilot will eventually get caught out. Without a speed bar your ground speed could be reduced to zero, and you could be forced to land miles away from your planned landing zone.

Opening the trimmers will help a lot, but there will be times when the trimmers simply don't add enough speed to keep you moving forward. You can push speed bar for an instant boost to get you out of trouble.

Caught out in rain

If you find yourself in this dangerous situation the speed bar could save your butt. When rain lands on your wing, a thin film of water droplets build up on the surface, which can disrupt the airflow over it.

The mass of the wing also increases as it absorbs water. This causes the wing to become heavy and sluggish, creating a further loss of lift, and an increase in drag.

These effects can be seen on many aircraft, but they're most pronounced in slow high-lift wings such as paramotor wings. This puts you at a massive risk of a parachutal stall, where the wing slows to almost zero forward air speed, and starts to drop vertically.

To help relieve or avoid the problem, you can speed up the wing. Open up your trimmers, and if you have your speed bar fitted, apply it. It would be best to land immediately rather than trying to get back to your landing zone, but beep these settings all the way down to the landing area, only releasing speed bar and closing your trimmers when you're ready to flare.

The speed bar is essential for regular cross country flyers, or competition pilots. You'll need to make the most of your airtime, and reach your destination as quickly as possible, more speed is the only answer.

Slalom pilots will also need to use speed bar, and being able to push bar without touching the brakes is vital.  This takes much time and practise, but it also has its risks.

The risks of the speed bar

Speed bar does have its risks, and you need to be very careful while using it.

Attaching the speed bar is fairly simple, but pilots have got it wrong and ended up in trouble. I recommend that you find an instructor, or somebody with plenty of experience to attach your speed bar for the first time, and to teach you how to do it in future.

This should also be part of the post-launch inspection, as the hooks can release without any signs or warnings. Pilots had devised their own backup systems such as pushing a piece of rubber tube over the Brummel hooks to hold them inline and hooked together.

You can also swap the Brummel hooks for mini links, or use the method below to keep the open ends away from each other.

Speed bar should never be used while the wing is trimmed to slow mode. And you should never in any situation use brakes while both trimmed out, and on speed bar. The wing is very stable when flown in this mode, but it will not react well, and will likely collapse if the brakes are pulled.

There may be some wings that allow speed bar use at any trim setting, but you will need to check for your specific wing. If you're unsure, follow the advise above.

Wings with flaps, such as Dudek's AFS (aerodynamical flaps system), will also need to be released when using the speed bar. A good way to remember this is to pull the AFS trimmers in during takeoff and landing, or thermal flying, but release them for all other situations.

The first time you use speed bar, be sure to try it out with plenty of altitude. As previously mentioned, applying speed bar with reduce lift, and you will be surprised at how much altitude you loose as you apply it.

Always have plenty of altitude to play with, and be ready to power up to keep yourself flying level.

Bare in mind that while using speed bar, your wing may be more susceptible to a deflation during turbulence. Turbulence plus speed bar means collapses are slightly more likely, so If it gets rough I recommend releasing speed bar.

But don't let this scare you away from speed bar, as it is still fairly rare, and speed bar on its own in normal conditions will not cause a deflation.

With all of this in mind, you can see how useful the speed bar can be. Beginners, or pilots who've never used speed bar can find them a little intimidating, and there seems to be some fear about using them.

But modern reflex wings that are sold with a speed bar have been designed with speed bar use in mind. The wings have been fully tested with speed bar engaged, and the manufacturers list anything that you need to be aware of in the user manual, so always check the manual before using it.

Now you know all about the paramotor speed bar, you can learn how to plan your first cross country flight HERE.