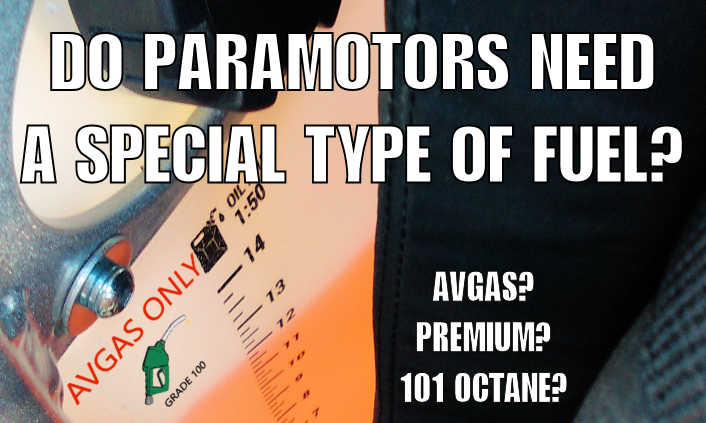 Fuelling a paramotor doesn’t need to be complicated or expensive, but there's a lot of confusion over what kind of fuel a paramotor uses.

These engines really aren’t anything special, but many people think that the aircraft status means they need to use a different kind of fuel. This isn’t true, so let’s look at what fuel different Paramotor engines use.

What kind of fuel does a paramotor use?

All paramotors are made to run on regular unleaded fuel, and certain engines will require the addition of a quality 2-stroke oil. Many people choose to use special fuels, octane boosters, or even aviation fuel, but in general they aren't required for normal operation of the engine.

If you’re new to paramotors or the most commonly used 2-stroke engines, you’ll be forgiven for thinking that they need a special kind of fuel, because in a way they do.

Although a regular unleaded fuel can be used for 2-stroke engines, the fuel cannot be added to the paramotor’s tank directly from the pump.

2-stroke engines do not have their own lubrication system, so when fuelling a Paramotor that uses a 2-stroke engine you need to mix a special 2-stroke oil with the unleaded fuel.

This special oil is essential for the operation of the engine. If you fail to mix the fuel to the correct fuel to oil ratio, the engine will overheat and seize.

All 2-stroke engines vary, so you will need to check the user manual for your particular engine to find out how much oil you need to add to the fuel. This will be written as a ratio, for example 40:1 which means 40 parts fuel to one part oil.

This can be confusing if you’re new to mixing fuel, so refer to the handy chart below to help you mix the correct amount of oil with your fuel.

You can also use a fuel ratio jug like this one (link to Amazon). 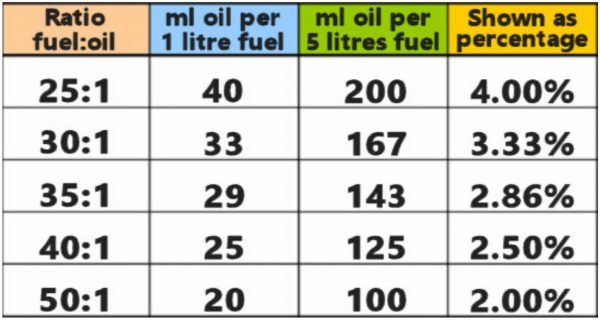 Most Paramotors use a fairly basic 2-stroke engine, and they will work perfectly with a regular unleaded fuel. But always refer to the manufacturers recommendations because some engines may need a higher octane fuel.

2-stroke oils vary considerably, and some of the cheaper oils will quicker gum up your engine. Head over and check out > THIS POST which contains an explanation of why the premium oils are better, and a list of the best choices on the market.

Fuelling a 4-stroke engine is a little different because of the lubrication system.

Just like a car, oil is added to the engine and stored in the sump to lubricate the engine’s internals, so you don’t need to mix oil with the fuel.

4-stroke engines will also be perfectly happy with regular unleaded fuel straight from the pump.

Should you use Avgas in a Paramotor?

Many people are fooled into thinking their paramotors need to use a special aviation fuel called Avgas, and I’ve known many paramotor pilots use it because they think that it's superior to regular unleaded.

This is a very costly way of running a paramotor, and it’s completely unnecessary. There’s also been various reports from paramotor pilots stating that their engines have been damaged by using Avgas.

Don’t get me wrong, this unique fuel is great when it’s used for the purpose it’s intended for. AVGAS is engineered for old style aircraft engines with low compression, but more importantly it is designed to have a very low vapour pressure to reduce evaporation at altitude.

Avgas also contains lead, and one big problem paramotor engines will face when Avgas is used is lead build up.

Lead deposits can build up in the combustion chamber causing pre ignition, on the piston rings causing them to stick, on the spark plug causing it to whisker, and in the bearings causing excessive wear.

This has been shown in many cases, and problems have developed in 2-stroke engines with as little as 50 hours running time.

"Whenever a paramotor arrives in my workshop that has been run on AVGAS, I send it back. I am not interested in repairing low hours engines that have been ruined despite my warning to the owners to not use AVGAS."

"I have yet to talk with anyone with a Top 80 engine that has used Avgas long term without issues."

There are some seriously small tolerances that lead can build up on, and this will wreak havoc on your engine. This is why you’ll see manufacturers like Air Conception, Vittorazi, and Miniplane amongst others, all recommending that you don't use Avgas, and that you stick to regular unleaded fuel.

One benefit of Avgas is that it will last longer when stored, this is because the lead is a stabilizer. So if you don't mind taking your engine apart every 50 hours and cleaning out the lead buildup as a trade off for having more stable gas, then you may consider using it. But I've personally left fuel in my tank for many months in a damp garage, and I've never had a problem.

So in conclusion, it’s best not to run your Paramotor on Avgas if you want your engine to last, or if you want to avoid a dreaded engine failure in flight.

What about all of the Avgas fans and pilots that recommend it?

You’ll most definitely hear paramotor pilots recommending Avgas, and they’ll probably even tell you it helps your engine; but these small engines won’t benefit from it in the slightest.

The video below shows an engine rebuild after 100 hours. This guy is a fan of Avgas, and his engine was completely clogged up from using it. An engine shouldn't be in this state after just 100 hours, and pilots flying the same engine with regular unleaded aren't having these problems.

Can paramotors use ethanol-blended fuel?

The majority of U.S. gasoline will contain around 10% ethanol to oxygenate the fuel, which reduces air pollution.

This means most pilots will only be able to get fuel that contains ethanol. But unfortunately ethanol can harm rubber, damage hoses, and attract water into the engine encouraging rust.

The increasing prevalence of gasoline being oxygenated with ethanol has led many manufacturers to change to alcohol resistant materials in all components that come into contact with the fuel, but that’s not to say that your particular engine is safe.

Generally, ethanol blended fuel isn't a problem for newer engines, as long as you use it within a few days. The biggest problem with ethanol is that it tends to absorb water into the fuel mixture after it's been sat for a period of time.

This means the main problem is storing the fuel, or leaving it in the paramotors fuel tank for too long, as the water can condense out of humid air inside the tank.

With enough water present the fuel will separate into two parts, with gasoline on top, and a water and alcohol mix at the bottom. This will make starting very difficult or impossible. So if you use E10 unleaded for example, be sure to store it in an airtight container and burn it within a week.

However, because high octane fuel burns much hotter, it can burn more efficiently, and therefore performs better for higher-performance engines that require it.

People see paramotor engines as high performance, but they really aren’t. They’re very basic, and if the manufacturer isn’t recommending high octane fuel then you shouldn’t use it.

95 is the lowest octane, and is suitable for almost all engines. This is the fuel I’ve always used in my paramotors, and they’ve all ran perfectly.

When it comes to filling up your paramotor’s tank, just keep it simple. Manufacturers know that most pilots only have access to normal pump gas, so they make engines that run happiest on regular unleaded.

I’ve never used anything other than unleaded 95, and all of my paramotors have run fine with it, and I’ve saved money along the way.

Always remember to follow the recommendations in your user manual, and be sure to always run good oil through your engine, this is far more important than your fuel choice.

With regular unleaded, and a quality oil you’ll likely get 200 hours out of your engine before it even needs a top end rebuild.

Enjoy your flights with cheap fuel!